Terese Lien Evenstad Quartet consists of award-winning musicians from Sweden, Norway, and Estonia. All members are outstanding soloists and improvisers, and together they give the audience a spectacular experience of musical interplay. The group plays contemporary nordic jazz composed by Terese, ranging from highly intense energy releases and harmonies to peaceful and beautiful melodies. The audience has been moved to tears as often as they have been cheering with joy. The music is atmospheric and can create images in the head of the listener, which allows the music to be felt in the heart.

The music are a mixture of different influences and inspirations such as jazz legends, Nordic Folk music, nature, happenings in life, art and groovy music from the ’90s. The landmark of this group is their playfulness and curiosity of spontaneous creativity. Every band member is an essential part of the music. TLE Quartet released their second album “Perceptive” in 2020 which received great reviews. 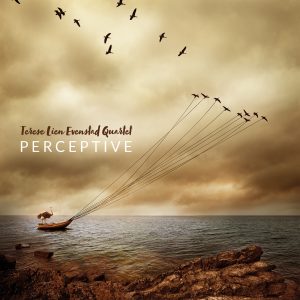 Listen to the latest album PERCEPTIVE on Spotify here

TERESE LIEN EVENSTAD was born in Norway and is the first jazz violinist in history to graduate from the Bachelor’s Program in Jazz-Performance at the Royal College of Music in Stockholm. Her music and performances have led to a nomination in the prestigious jazz prize of Jazzkatten in the category “Newcomer of the year 2018” which is awarded by the Swedish national radio P2. She was also awarded the “Louis Armstrong-scholarship” in 2018 with the motivation: “She has given the violin a new face within jazz”. Terese has also been honored to perform her music with “Bohuslän Big Band”, one of the most well known big bands in Sweden. She was invited to their project called “Up-and-coming artists 2019”, where they present young musicians who have made a name for themselves in the Swedish jazz society. In 2019 she was nominated for the concert series “Young Swedish Soloist 2019” produced by Scenkonst Sörmland and awarded the “J: son Scholarship” by Janne Schaffer and the Jury.

BRITTA VIRVES is a pianist born and raised in Saaremaa, Estonia. She moved to Sweden in 2014 to continue her musical journey at Skurup Folkhögskola and thereafter at the Royal College of Music in Stockholm. In recent years she has been playing and touring with Norrbotten Big Band, a Danish singer´s Marie Mørck Quartet, Håkan Broström, Mainland Jazz Collective and many more. She leads her own piano trio that is going to record it´s debut album in the fall 2021.

ARVID JULLANDER from Gothenburg, Sweden, is one of the most interesting and upcoming bassists in Sweden. He has played with top musicians from all over the world. Chosen as one out of three bassists to the “Betty Carters Jazz Ahead” program, he got to work with Jason Moran, Eric Harland, Carmen Lundy, and Eric Revis, among many others. After studying at The Royal College of Music in Stockholm, he is now one of the hardest working musicians in the city. In August 2018 he was awarded the “Monica Zetterlund” award, which is given out to one young up and coming jazz musician every year.

PETER DANEMO is a Stockholm-based drummer and composer. Danemo has formed and played in a wide range of groups during his career. For example, Peter Danemo Quartet, whose members included Esbjörn Svensson, the Swedish pianist who would go on to achieve massive global success as the driving force behind contemporary jazz group EST. Danemo has received wide recognition for his composing skills. In 1993, for instance, he won first prize in the Concours International de Composition de Themes de Jazz competition, which is held annually in Monaco. He has made large numbers of recordings with many groups and been involved in countless tour projects across Scandinavia and Europe with jazz stars such as; Clark Terry, Kenny Drew, Niels-Henning Ørsted Pedersen, Red Rodney, Arne Domnérus, Bengt Hallberg, Bobo Stenson, Miroslav Vitous, Toninho Horta, Nils Landgren, Aaron Parks, Iain Ballamy, Viktoria Tolstoy and many more.